Did you know one out of every three adolescents is a victim of emotional, physical or sexual abuse or violence from a dating partner?

Children growing up in homes where there is domestic violence and abuse likely grow up in an atmosphere of fear, uncertainty, and insecurity. Children may assume they are responsible for the situation because they have misbehaved, or are not “good enough”. Their loyalties are sometimes torn between parents, and they may develop a variety of coping strategies to help them manage their feelings, often with negative consequences.

Children who live with domestic abuse have significantly higher levels of behavioral and emotional problems than other children. Some react aggressively, others may withdraw. They may experience social and physical difficulties, as well as perform poorly in school.

Intervention by counselors or advocates specially trained in domestic violence can be of great help to children in overcoming the effects of domestic violence, and may help children to avoid growing up to become victims or abusers themselves.

Currently, services for children are primarily for children in our residential programs. Please contact us to inquire about current services/referrals available for nonresidential children.

If you have just been sexually assaulted it is vitally important that you are aware of your legal options and that you do not compromise evidence you may need in the future. DASI Sexual Violence Survivors services and the Sussex County SART can help you to get through this difficult time.

It is not uncommon that for weeks, months, or even years after a sexual assault to suffer emotional and/or physical difficulties because of it. Flashbacks of the attack, depression, anxiety, insomnia, lack of appetite, headaches, poor concentration, among other effects, can make normal functioning a challenge. Services such as the DASI 24-hour Helpline at 973–875-1211 (collect and anonymous calls accepted), and DASI Supportive Counseling and Information & Referrals can help.

Teen relationships can be as violent and abusive as those of adults, and just as dangerous.

Even before teenagers have figured out how to deal with romantic relationships, they are forming committed bonds. Abusive dating partners are usually romantic and charming at first, and may sweep their partners off their feet with lots of attention and intense bonding.
It is not uncommon for a teen to confuse jealousy, possessiveness, and controlling behavior with love.

Being in an abusive relationship can be scary and confusing. It can feel like a roller coaster ride, with unexpected turns and frightening plunges downward. A teen victim may feel isolated and alone, embarrassed and ashamed, and unsure where to go for help. She/he may be conflicted as to whether to stay in the relationship or try to leave it. If the partner promises to change, how will she/he know the change is for real? If the partner doesn’t change, how can one extricate oneself from the relationship if the partner threatens to hurt the victim, the victim’s family, or himself or herself?

These are very serious concerns. 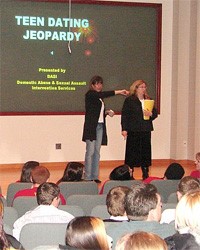 Teens today face challenges unlike any that have come before. Navigating the current mine field of influences, pressures, needs and feelings takes an enormous amount of maturity and skill, but even the most mature and skilled among them may be at risk of uncharacteristic behaviors or an unanticipated event that could change their lives forever. Particularly at risk are teens who lack the knowledge, skills and resources necessary to be successful in the many kinds of relationships in their lives. It is our belief that healthy, respectful relationships and “relating” can bolster a teen’s ability to make positive life decisions. Our focus is on teen dating relationships, however, the skills and information communicated to participants are relevant to many types of interpersonal relationships.

We also focus on teen dating relationships because of the detrimental, and often dangerous impact of unhealthy, abusive and violent behaviors. Teen dating violence is a significant problem because of its alarming prevalence and its physical and mental health consequences. Although statistics as to prevalence vary widely, most studies of middle and high school students estimate the rate of physical aggression to be between 10-20% in the general teen population, and much higher in high-risk youth.

In several large studies, dating violence was linked to high risk behavior among adolescent girls. Findings indicate that girls with a history of physical and sexual dating violence are four times more likely to engage in substance abuse, including binge drinking, cocaine use, heavy smoking, as well as unhealthy weight control behavior including the use of diet pills and laxatives. For teens in abusive relationships, sexual and physical violence are often connected. Pregnant teen women often have a history of physical, sexual and/or family violence. Teens who have experienced childhood or adolescent sexual abuse also have a greater sexual vulnerability, which increases the risks of unintended pregnancy and further abuse.

One study reported that 62% of pregnant teen women have been victims of molestation, attempted rape, or rape, before their first pregnancy. Coercive, controlling, and violent behavior can be extremely frightening for an adolescent girl. She may be forced into risky behaviors, or she may escape the pain of the relationship through high risk activities, such as substance abuse. In either case, intervention is vital.

Teen dating violence is also of serious concern because it occurs at a time when teens are discovering romantic relationships, and patterns of interaction and communication are learned that may carry over into adulthood. Teen dating violence can cover a continuum from emotional and verbal abuse to sexual assault, rape and even murder, paralleling adult domestic violence. In order to prevent domestic and sexual violence in adults, we continue to reach out in a significant way to teens, and provide the services that they need.